Over the course of evolution, all living organisms developed a repertoire of adaptive responses to evade a range of threats (Bolles 1970). Under conditions of threat, an animal’s behavioral repertoire becomes limited to these species specific defense reactions. Since each species has several defensive responses available a critical question is how an animal matches a particular threat with the most appropriate defensive behavior. Fanselow and Lester (1988) proposed a response-selection rule based on a series of fear conditioning experiments, where it is the prey’s perception of the likelihood of being consumed by a predator that determines the defensive behavioral topography. They suggested that defensive behaviors fall along predatory imminence continuum (Fanselow and Lester 1988). 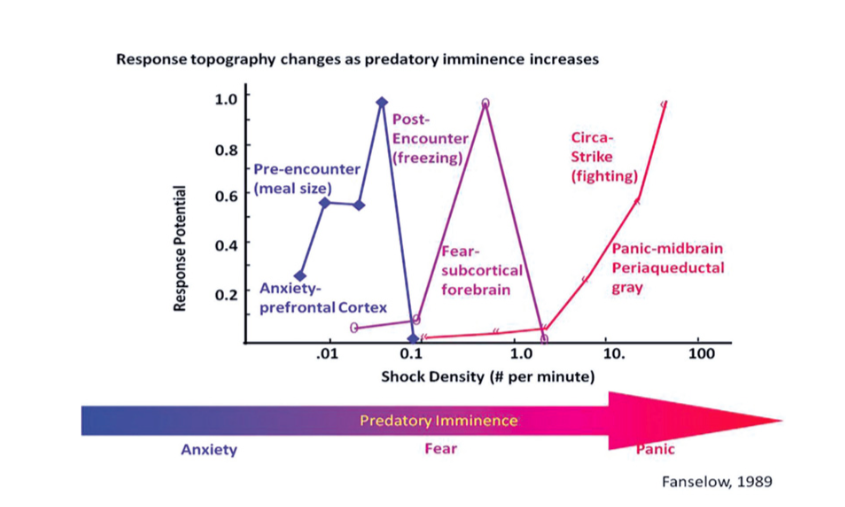 Imminence is influenced by spatial and temporal distance of the predator. The dimension is one of psychological distance from the predator that is determined by physical, temporal, and probabilistic closeness to contact with the threat. Characteristics of threat also determine imminence; so, for example, a gazelle flees from a lion before it flees from a hyena (Walther 1969).

The defensive behavior system is viewed as having three modes that are activated by different levels of fear:

Inhibitory interactions between the structures mediating circa-strike and post-encounter defense allow for the rapid switching between defensive modes as the threatening situation varies. 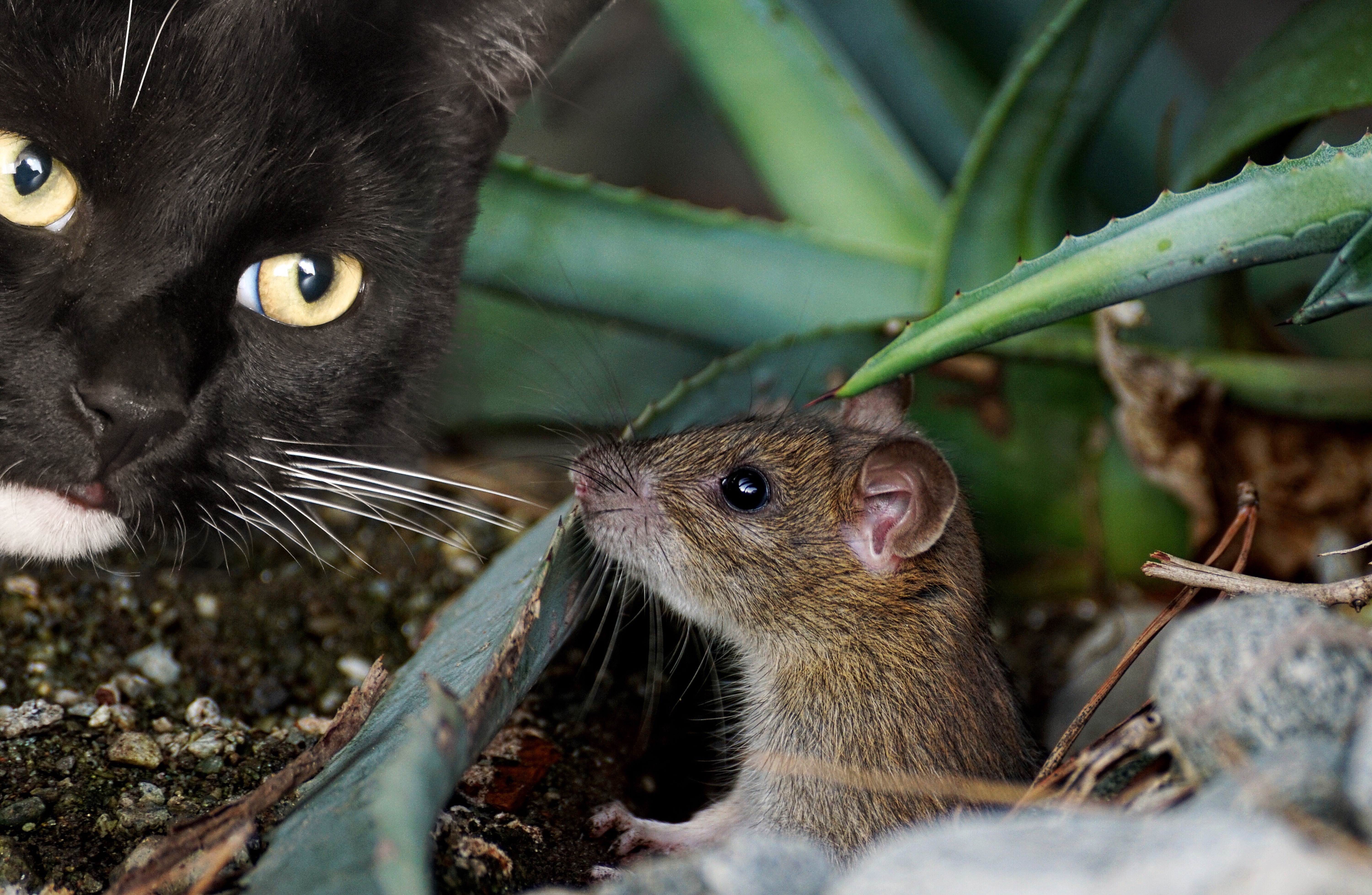 Fear and anxiety are theoretical constructs and such constructs are of value only if they explain and predict behavior (Bolles 1975). A strong distinction should specify the difference in conditions that lead to fear versus anxiety. Additionally, fear and anxiety should generate distinct sets of behaviors. Ideally, the two states should be supported by distinguishable neuroanatomical circuits. Such a conceptualization would be consistent with the National Institute of Mental Health’s Research Domain Criteria (RDoc). The majority of neurobiological approaches to the fear versus anxiety distinction fail to differentiate the two states in terms of behavior, often using the exact same behavioral measures as indicators. Of the two that do, only Predatory Imminence Theory provides a distinction both in terms of cause and effect. Indeed, that approach provides a ready distinction of anxiety, fear, and panic in terms of both antecedent conditions and response selection rules. Additionally, it appeals to distinct neural circuits to generate these modes of action. 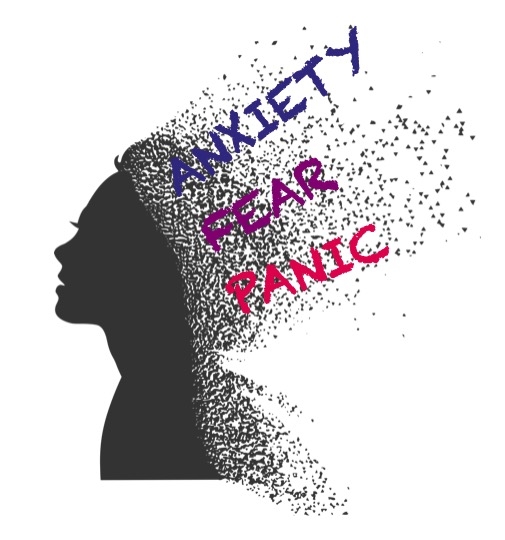 Neural circuitry of fear and anxiety

Neurobehavioral studies have identified components of a core circuit that is thought to produce and regulate both fear and anxiety. Pavlovian fear conditioning has been the principle tool in unraveling this circuitry. During fear conditioning, an aversive unconditional stimulus (US), such as a footshock, becomes associated with an initially nonfearful stimulus such as a tone or the context (chamber) in which training takes place. As a result, the previously nonfearful stimulus now becomes a conditional stimulus (CS) that provokes a number of quantifiable responses, including freezing, potentiation of startle, analgesia, and hypertension, in the absence of the US. These responses to fear are the species-specific defense reactions that evolved to protect us from threats (Bolles 1970; Bolles and Fanselow 1980; Fanselow 1984). Thus, the circuitry that underlies fear is this defensive behavioral circuitry (Fanselow 1994). 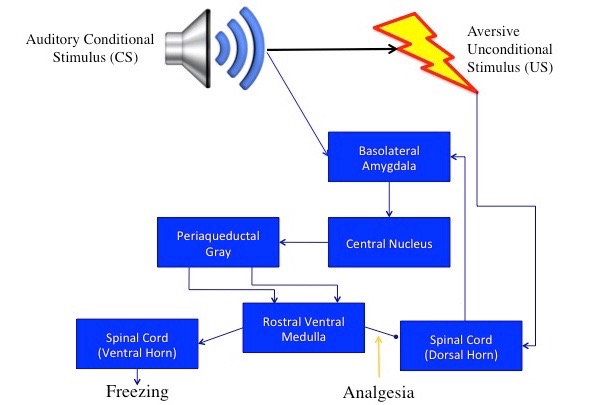 SEFL uses both nonassociative and associative fear learning to attempt to elucidate fear versus anxiety. Rats exhibiting SEFL also show an anxiety profile on the elevated plus maze, a long-lasting dysregulation of the diurnal cycle for corticosterone (CORT), and an increase of glucocorticoid receptors (GR) in the BLA (Poulos et al. 2014). Moreover, SEFL-rats acquire increased consumption of alcohol (Meyer et al. 2013). In other words, SEFL behavior reflects several of the symptoms and comorbidities of PTSD. 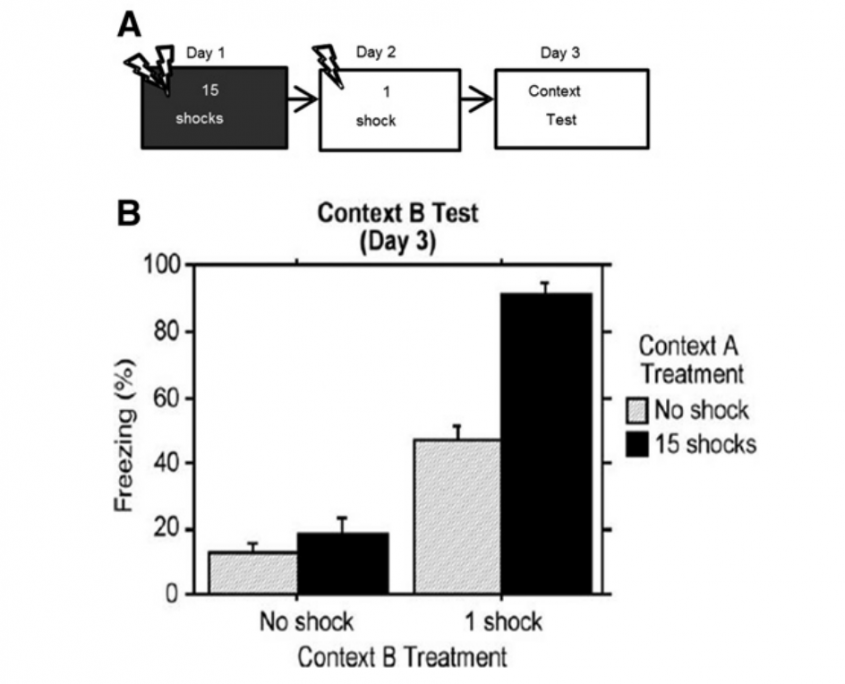